Norristown’s Eagles captured the 34th Annual Triangle Club Basketball Tournament on December 28, 2007. The undefeated Eagles upped their record to 12-0 with a 67-51 hard-fought victory over the Winged Lions of St. Pius X. The championship game was much closer than the score indicates.

Norristown tried hard to run an up-tempo offense all night. But coach Randy Reber’s Winged Lions made the Eagles work hard for their points. Norristown’s James Ramsey was leading the way with 12 first-half points. Norristown led 28-21 at the half.

Pius outscored Norristown 18-17 in the third period, and trailed by only 6 points heading into the final frame, 45-39. Key contributions from St. Pius came from undersized Josh Martin in the paint and long-range shooting from sophomore Andrew Meszarus (two 3 pointers). As the game progressed Norristown started controlling the boards with 6’5″ senior Maurice Briggs, who also tossed in a season high 16 points. The guard rotation led by senior playmaker Russell Graham, Paul Savage, and Sheldon Mayer put on the pressure defense and got the Eagles fast break working.

The Winged Lions (5 wins and 4 losses) playing with a short bench due to injuries, started to run out of gas. Despite the hustle of two 6′ sophomores Mike Dinnella and Ross Reber, and senior Eric Von Stetina, the Winged Lions had no answer for Norristown sharp shooter Khalif Wyatt. The strong 6’3″ junior tallied five 3-point shots and Norristown pulled away in the fourth period. For his heroics, Wyatt was named the tournament MVP.

Norristown has now won the Triangle Tournament for the last four years. Kennedy-Kenrick won back-to-back tournaments in 2000 and 2001. Philadelphia’s George Washington Carver won in 2003. The two-day tournament drew over 1,000 fans to the Norristown Gymnasium. 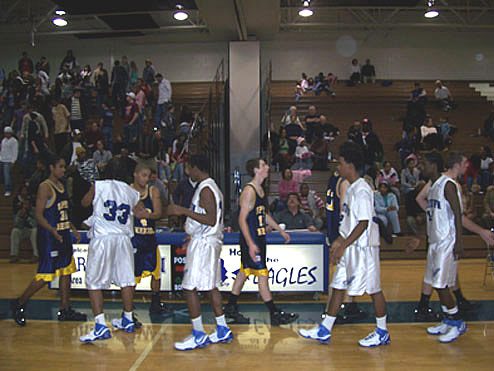